Excerpt taken from our organizational by-laws:

2. SymCentral represents a new region (“REGION”) hereby defined as a combination or merger of the Midwest (or “SMUG” on the map in APPENDIX A and SSCUG (or “South Central” on the map in APPENDIX A) regions as previously described by Jack Henry and Associates®/Symitar® and published on their For Clients website. As of this writing, the Region is comprised of the states of Arkansas, Illinois, Indiana, Iowa, Kansas, Louisiana, Michigan, Minnesota, Missouri, New Mexico, Ohio, Oklahoma, Texas, and Wisconsin.

3. Membership is subject to change by Symitar® and verification by the SymCentral official organization leadership.

B. Direct Members
1. Direct Membership (“MEMBER(S)”, “MEMBERSHIP”) in SymCentral and participation in its sponsored or provided activities (“ACTIVITIES”) is offered to direct employees and full-time dedicated contractors of credit unions that have a signed contract with Jack Henry and Associates® to use Episys® as their core banking system database/software AND that such credit union is located or headquartered in the REGION served by SymCentral (“ELIGIBLE CREDIT UNION(S)”).

C. Indirect Members
1. Indirect membership in SymCentral and participation in its ACTIVITIES is offered by extension to any employee of an otherwise ELIGIBLE CREDIT UNION located outside the SymCentral REGION.

D. Non-members
1. Vendors, consultants (other than as provided for in B.1. in this section), employees of a CUSO, or anyone not a direct employee of, or currently holding a position in, an ELIGIBLE CREDIT UNION are not eligible to be MEMBERS of SymCentral.

2. MEMBERSHIP, direct or indirect, is not required to participate in certain SymCentral ACTIVITIES, such as invitation-only attendance at its conventions or joining in its website, email list service or other online collaboration on an invited or case-by-case basis. Such participation in these ACTIVITIES may be further limited by the SymCentral official organization leadership.

E. Discretionary
1. Individual MEMBERSHIP and participation in SymCentral sponsored or provided activities is at the sole discretion of SymCentral official organization leadership. 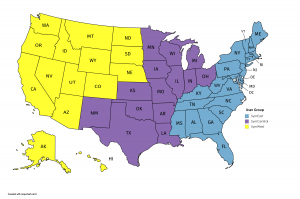